Safety’s in the Air Safety and dependability in the fuel-delivery sector are paramount, and employing the latest technological solutions goes a long way to achieving this. This is especially true when the trucks in question travel a mix of on- and offroad routes, which throw up varying levels of traction. Making the driver’s job easier and safer has a direct impact on their job satisfaction and the longevity of the company’s assets.

For Waitomo, this meant fitting the Traction Air central tyre-inflation (CTI) system to the drive axles of its 10 new DAF CF tankers, which deliver fuel to farms and commercial fuel tanks in the Auckland, Bay of Plenty, Central North Island, and Wellington regions. Waitomo’s relationship with TRT goes back to 2018, and Greg Price, Waitomo fleet manager, says TRT has developed an understanding of Waitomo’s business and needs.

“Traction Air and TRT align with Waitomo’s values and the locations in which Waitomo operates across the North Island. Traction Air is a proven system but at a competitive upfront cost, and this was backed up with excellent support and service, which gives us confidence in the solution.” Matt Counihan, Traction Air product specialist, explains that although some trucks in the Waitomo fleet are fitted with the Traction Air G Series system, the 10 new DAFs all feature the latest E Series smart CTI system. “These systems have been spec’d specifically for Waitomo’s needs,” he says.

Price says fitting the Traction Air system lowers the impact on electronic equipment such as meters and tablets when travelling empty and off-road. “Given the significant amount of offroad driving our farm-trade trucks do, the CTI system is important to Waitomo as it increases the traction in offroad environments. It also increases the footprint and traction when going up metal inclines, along with increasing tyre life,” he adds.

Gavin Halley, TRT national sales manager, explains that the E Series is notable for its safety features, the redundancy provided through back-up transducers, and the accuracy of measurement. “This makes it a natural fit with the fuel industry.”

The Traction Air E Series features numerous hardware and control software enhancements. On the hardware side, E Series has a new valve set up in a sealed stainless cell, imported from Germany. In terms of pressure-measuring equipment, the second transducer mentioned by Halley is installed to monitor the system for failures. “This provides confidence and assurance that if there’s a failure, there’s another level of protection providing peace of mind,” Halley says.

The E Series is managed by one of two interfaces, a DIN mounted ECU that fits into a radio slot or a touchscreen ECU for multi-channel applications (when running different pressures on the front and rear axles). The ECU in the cab will independently manage both channels at different pressures (if required as an option).

The system features enhanced safety features, enhanced air-leak detection, and additional warnings – for example, if the driver forgets to turn the taps on the ECU will tell them exactly that.

Importantly, the E Series operates on a CAN bus network, which means it is expandable and can interface with the vehicle directly or any other third-party equipment (such as telematics) if needed.

The system features its own GPS integration, a key safety feature when moving between sealed and unsealed roads. Halley explains the GPS integration allows for independent, accurate measurement of vehicle speed. “The ECU will alert the driver to adjust the pressures when necessary. If he doesn’t, the system will override the driver and set the optimum pressure for the speed. That gives the fleet owner the peace of mind that the driver can’t override the system and compromise the asset.”

Price adds: “The alerts and automatic raising of the pressures when returning home empty helps the driver focus on driving and delivery of the product.” 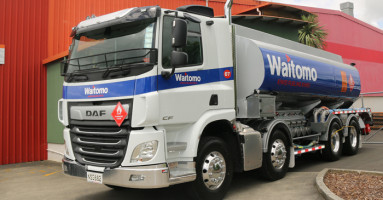 Counihan explains that Waitomo’s farm-trade trucks feature pre-programmed selections that provide the drivers with a consistent tool to help them in challenging terrain. While most systems feature five pre-set pressures, to meet Waitomo’s requirements three pressure modes have been programmed for drivers to choose from: on-road loaded, on-road empty, and maximum traction for off-road.

Price comments that these three selections make system training and understanding the benefits of each selection clear and concise.

“The programming parameters are now endless. We can customise it specifically for a customer’s requirement on the spot,” Halley notes.

“In that fuel sector, it’s all about having the right tyre pressure for the load and terrain, and when those vehicles are going offhighway, all the features and safety backup are at hand to ensure both assets and people are protected,” he concludes.